Turkey Brings the World to the Cusp of WWIII 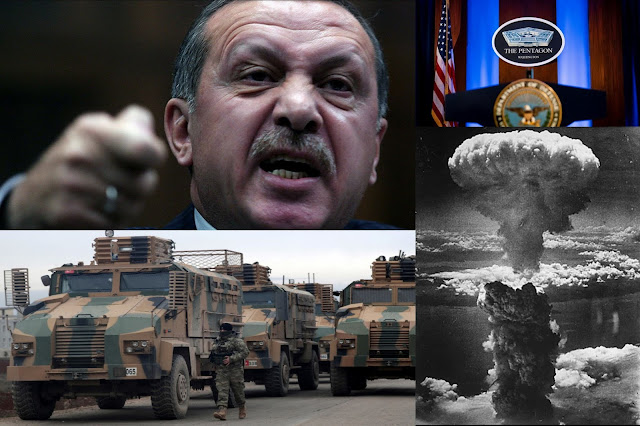 On March 1, 2020, the Turkish ultimatum to Syria regarding their anti-terrorism campaign in Idlib expires when the Erdogan government will have to decide if it is ready to turn its threat of a full-scale military action against the Syrian army into reality.

The fact that Turkey invaded Syria in 2016 and has supplied weapons to the terrorists in Syria since 2011 is a statement by Turkey’s leader that he is determined to get his way, regardless of what his Russian partners think.

Erdogan is not only breaking International law but continuing to commit war crimes against the Syrian people. And if that is not enough, he has also threatened Syria’s partner Russia as well. This fact brings on a whole other level of danger since Turkey is STILL a NATO member and can invoke article 5 and pull in the US and NATO members who are desperate to justify anything for a military way back into Syria…

It seems that Erdogan has flip flopped his loyalties from Russia to America once again not by just mere words but by his actions of pouring massive amounts of military equipment into the terrorist held areas of Syria’s Idlib province asking the Americans for military support and then by threatening both the Syrians and Russians to leave.

This isn’t the first time that Turkey has turned on its Russian neighbor and given them an ultimatum.

Going back to 2015 before the staged coup on Erdogan in 2016, Turkey had been plundering Syrian wealth and leading its terrorist proxy army against the Syrian and Russian Military, and I might add with the US and NATO leaders support.

Turkey also shot down a Russian plane and ramped up its own military for a massive invasion into Syria.

At the moment of writing this post, there have been serious clashes between Turkey and Syria.

Over the past two weeks Turkey has brought thousands of pieces of military equipment and soldiers into Syria and has used them to support the terrorists against the Syrian army including surface to air missiles launched at Russian and Syrian aircraft. The Syrian airforce responded in kind to the Turkish attacks and killed at least 33 Turkish soldiers with an unknown number of wounded.

Erdogan called an emergency meeting on Syria and Turkey's Anadolu news confirmed that Turkish officials have called the NATO secretary-general and the US national security adviser in relation to the events in Idlib.

We are at a very dangerous point in History where this conflict can quickly spiral out of control into a 3rd World War.

Erdogan has proven to be mentally unstable and will surely launch another offensive into Syria. The question remains, will Erdogan’s tantrum and insistence to invoke NATO’s article 5 convince an ignorant Donald Trump and NATO to back him? If mad dog Erdogan gets his way, World War III will not be far off…however, if the US and NATO keep their heads and realize that backing Erdogan means backing terrorism, then Erdogan will have no choice but to leave Syria for good.

Eva Bartlett & George Galloway on M.O.A.T.S. Discuss Idlib Syria and the terrorists that Turkey and NATO are protecting.

An excellent introduction on the nature of systematic, paid-for, organized, deliberate, war propaganda on Syria, to deceive people and whitewash the nature of the heinous, criminal, actions of the terrorists dubbed by the west as "rebels" who have beheaded children, among other crimes.

The mainstream media's portrayal of what is happening in Syria are totally false with incessant demonization of Syria and Russia. Syria has a legal right to fight terrorism, and is obliged by the Syrian people to do so.

You can also find Eva at the following links:


‘We fought Russia 16 times and will fight it again,’ warns Erdogan’s adviser amid Idlib escalation
NATO to hold emergency meeting at Turkey's request to discuss escalation in Idlib –secretary general 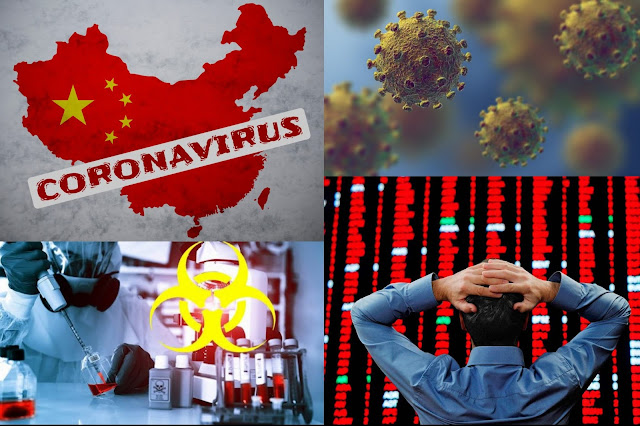 By: Stewart Brennan - Opinion with a brief look at what the Corona Virus can do to the global economy.

In cases like this, I always look to see who benefits from what could be a possible psy-op. In the case of this anonymous person who wrote the article, he does make interesting comments and connections in reference to the US / China economic war...an economic war that is real but now with an added possibility that it has escalated in this case with a Bio-weapon possibly unleashed in Wuhan China...it could very well be the beginning of a nasty 2nd stage in the economic war that is raging between the USA and China...if so...well there's no good in what comes next as history has taught us that economic wars become military wars at some point...a bio-weapon would surly be an act of war but no one in China is saying anything at the moment.

So, what is the Corona Virus doing to the Chinese economy?

Well, at the moment, 750 million people in China are on lock down...all traffic out of China is on a two week quarantine (minimum) where 90% of container traffic originates...the longer this lasts the worse it will be for the global economy which at the moment is controlled by a bankrupt reserve US petrodollar currency...and a large manufacturing base in China where all the western corporations went willingly...

The Chinese economy will certainly feel the stress of all this as will the rest of the world. Time will tell where this all leads.

In the west, the first economic quarter has been slow as in recent years however, if the container movement from China continues to be quarantined while factories continue to sit idle due to a lock down, then economics will slow down globally. Job losses will echo throughout the O.E.C.D. nations and that begins a vicious cycle of economic downturn.

One of the major white elephants in western growth / debt economic picture is that their private banks have inflated real estate to unreachable levels that sooner or later something has to give because as it stands now our children and grandchildren will not be able to afford a home or condo with the low salaries provided in a service based economy...and with rental properties being bought up by large land owners and banks who drop these properties into the laps of their for profit property caretaker corporations, we are seeing a rise in "Absentee Landlords" who empower subordinates with the task of turning a profit on people who are struggling to make ends meet.

If a global pandemic is declared or if the virus continues but is contained in China for a prolonged time, then we will see many store closures, job losses and bankruptcies. Job losses means mortgages cannot be paid, foreclosures happen and the private banks take possession of peoples homes.

Consumerism will drop off significantly with the exception of food which will see a more pronounced inflation than the 25% to 30% jumps we have seen since the 2008 - 2009 economic crisis.

In my opinion, neither the Chinese nor American model of economics should be embraced because it is the exact same interest bearing debt, consumer growth dependent system.

We need to return to a self supporting system, where we nationalize all the Private banks and reclaim what they stole from us! We need to overhaul the seats of government so that they support people and not private corporations. Some corporations also need to be nationalized so that the people are not made to suffer food, water, medicine, housing and energy shortages.

Oh, and if you are worried about climate change then you need to realize that the private banking consumer debt / growth economic system is the chief factor in environment destruction and pollution around the world...and THAT must end so maybe it's time we all take a closer look at what is truly important. It's time to let go of this insane economic system and rebuild!

Was this really an accident?

Posted by Stewart at 7:41 PM No comments: