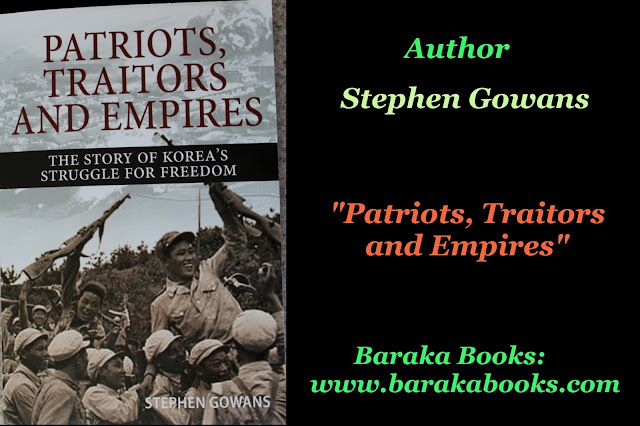 Patriots,Traitors And Empires – The Story of Korea’s Struggle For Freedom

Patriots, Traitors and Empires is an account of modern Korean history, written from the point of view of those who fought to free Korea from the domination of foreign empires. It traces the history of Korea’s struggle for freedom from opposition to Japanese colonialism starting in 1905 to North Korea’s current efforts to deter the threat of invasion by the United States or anybody else by having nuclear weapons.

Koreans have been fighting a civil war since 1932, when Kim Il Sung, founder of the Democratic People’s Republic of Korea, along with other Korean patriots, launched a guerrilla war against Japanese colonial domination. Other Koreans, traitors to the cause of Korea’s freedom, including a future South Korean president, joined the side of Japan’s Empire, becoming officers in the Japanese army or enlisting in the hated colonial police force.

From early in the 20th century when Japan incorporated Korea into its burgeoning empire, Koreans have struggled against foreign domination, first by Japan then by the United States. Some protests were peaceful; others involved riots, insurrection and sustained guerrilla war. After the US engineered political partition of their country in 1945, the Koreans fought a conventional war, from 1950-1953. Three million gave their lives.

Examining the history of the Republic of Korea (South Korea), Gowans shows that it can be accurately qualified a “US puppet state” or even “a stationary US aircraft carrier.” Only when faced with virtually insurmountable military threat did the Democratic People’s Republic of Korea (North Korea) resort to nuclear weapons to ensure its defense.

Patriots, Traitors and Empires, The Story of Korea’s Struggle for Freedom is a much-needed antidote to the jingoist clamor spewing from all quarters whenever Korea is discussed. ~