Economic Change is Coming to the World 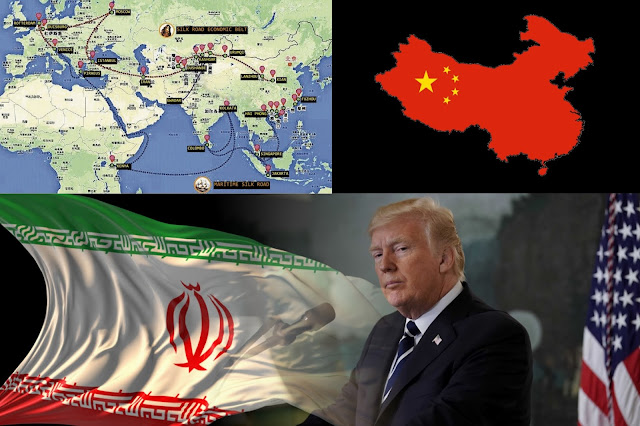 As the US economic cartel reels from its geopolitical losses in the Middle East, the speed of their economic contraction now looks more likely to head into a full scale collapse for the 20 trillion in the hole US dollar. In fact, I believe we will see a more rapid, or God forbid, a more violent stage of economic contraction as the US government goes against its economic vassals in Europe and scraps the Iran Nuclear deal…

Iran has kept its part of the agreement whereas the US government has shown once again that they are not trust worthy for any type of agreement with any nation on anything except their promise to destroy nations that don’t go along with their economic dictates.

US President Donald Trump, refused to certify the Iran Nuclear Deal on October 13th, 2017; a little more than two years after the P5+1 (France, Great Britain, Russia, China the USA and Germany) reached a deal with Iran. The Trump decree now goes to the US Congress to decide within 60 days on weather to re-impose sanctions or not. A vote for sanctions will kill the deal. We already know what Israel and the Israeli lobby in the US wants, as they believe the Iran Nuclear Deal is a “BAD DEAL”…and they control the US congress.

The decision of US President Donald Trump and indeed the history of the overall behavior of the US Government has put the USA on target for economic isolation by its European partners who need Iran’s oil for economic survival…I wrote about how the USA would never honor the Iran Nuclear deal two years ago in a facebook post on Sept 10th, 2015 just after they signed it. Well, low and behold the current US President has proven me right.

The Economic Future of the USA

Regardless of which way the US congress votes, the USA will continue to decline economically, the decision by congress will just decide on the rate and speed of the US economic collapse.

Iran has already begun selling their oil in everything but US dollars and Europe will buy their oil from Iran regardless of what the US decides, as indeed the EU has made it clear to the US Government that not only is Iran in compliance with the Nuclear Deal, but that Europe will continue to do business with Iran regardless of what comes down the road with US economic policy.

The trends show that major Independent oil producing nations such as Russia have moved away from the US dollar as well due to Washington’s continuous hostile economic and military stance against their economic Independence.

Energy is what powers an economy, it is also what props up the US dollar and keeps the US dollar as the reserve currency…and that is about to change.

The economic options available to the World seem to be either, continue using the US dollar as a global reserve currency or use other currencies such as the Chinese Yuan which comes with an economic package of a New Silk Road with rail links to Asia, Europe and the Middle East. This economic package for Europe is a no brainer especially if the USA can no longer supply Oil and Gas to its European vassals and force them to use the US dollar in transactions.

The US is fast losing its geopolitical influence around the world and so the economic war that the US has created through their economic and military threats are beginning to backfire on themselves.

The conclusion is obvious, a decline in confidence in the USA as the global economic leader will crash their already bankrupt economy. How far will the US Government and its Deep State go to maintain its supremacy? We are going to find out…

However, should a confrontation for world dominance emerge between economic rivals the US and China…well, this chapter has already been written as the major stock holders in the corporate cartel in the western countries have sent their manufacturing capacity to China willingly over the past two decades and have also plugged China into the oil that they need to power it. Our entire economy is based on consumer spending where just about everything is made in China.

So, is the entire world being played the fool while a scripted economic World Order is put into place? There is evidence to suggest that this is indeed the case considering that the Chinese banking system contains both state and “private banks”.

China rose to become an economic power because of the western business cartel, and China receives the energy they need to maintain their steady growth…

Question: If China was the economic enemy of our governments, why would western economic oligarchs give China everything they need including the energy to defeat the western economic cartel, unless that cartel is a business partner with Oligarchs in China…China’s strength comes from state run public central banks but there are also major private banks operating within the Chinese corporate cartel that controls a large part of their economy.

When you are in business and have a large share of the business but want to corner the market and take it all, all one has to do is create a knock down cheaper product to put your rivals out of business. This hostile business tactic has been employed against competition since Standard Oil cornered the Oil market in the USA in the late 1800’s.

The usury model of business and private banking requires growth to sustain company margins…China also requires huge growth to maintain its ferocious economic appetite. That spells a guaranteed disaster down the road for everyone unless we do something about it now and change the way money works.

As much as I enjoy seeing the belligerent US economic empire go down in flames, I do not want to see another one rise in its place. Real changes need to happen in the nations economies of the world, not a redirected alignment to a corporate cartel from China...Greed is, of itself, very predictable and very destructive to all communities, be they in China, the EU, Africa, North America or South America.

The Private banking system is purposely flawed in favor of those in charge of it...so it doesn’t matter what country is in charge of the global economic system if the system has the same majority stock holders with the same type of debt based usury system…I don’t want US economic dictatorship and I certainly do not want Chinese economic dictatorship! What I want is a REAL new deal! Not a change in tyrant bosses…

To my fellow human beings around the world, it’s time we stood up in every single nation to Re-Nationalized our resources and start using public central banks to reel in the criminals that have taken control of our nations. It’s time for the World to embrace a sustainable life rather than an unsustainable life that leads to global suicide.

Restructuring government to work for the people must be the top priority in every nation today so that we all have a future together on this planet.

Our nations are being raped by greedy corporations that have no moral responsibility nor an off switch to stop their endless pursuit of growth… all the revenue streams in every nation have been hijacked and our politicians endorse this behavior…it is the same in every country that does not have control of their monetary system…and our Countries, are now on the brink of an economic disaster because of it…

Take charge and make the changes because those in Power will not listen. Bring back economic stability by using public central banks the way they are intended, to serve the community. Nationalize your nations resources and remove the criminals from power! Change the way your government works. You only get one chance to make the changes necessary in your country, so be sure to organize now so that when the economy fails you are ready to make positive changes with everyone on the same page.

Netanyahu thanks US leader for 'fixing bad deal'