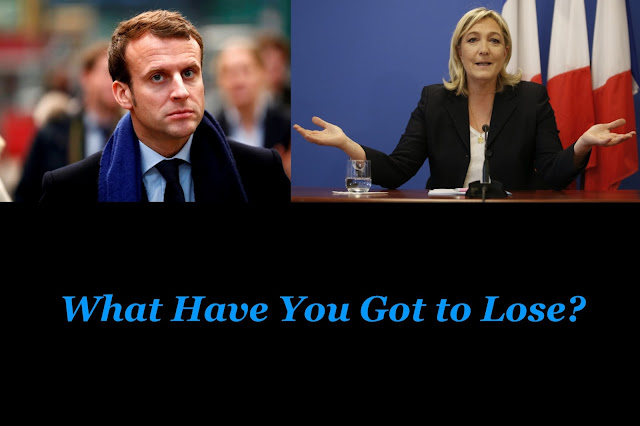 The stage is set for a showdown in France between the European Union, French deep state candidate “Emmanuel Macron” and ultra nationalist candidate “Marine Le Pen”…

Here are my thoughts on the French election:

The Euro dictatorship in Brussels has their deep state candidate running in the French Elections, Mr. Emmanuel Macron -“ni” or “nyet”?

If Macron wins this high stakes poker game, France will be history… the people of France will lose everything they've gained socially and go down the path of an EU bankruptcy…a bankruptcy filled with austerity that will continue to rip France apart and bleed jobs away from the country the way they did to Greece…and of course, we must not forget that the EU also has a belligerent US economic foreign policy driving it. The USA does NOT like Socialist countries and is doing its best to destroy every single one of them…that is one of the reasons why the EU was created in the first place…to end European Socialism.

“One Bank to rule them all, one Bank to fine them, One Bank to in-debt them all and in austerity bind them…”

France and all other European nations have been held hostage to an unelected executive EU governance which has held them in an iron grip of economic obedience…is it any wonder why we are hearing the sounds of revolt and revolution reverberating across Europe…Le Pen has the Eurocrats freaking out because if she wins, the dictatorship of the European Union will be over and so the European, US and French Deep State are going to do everything they can to stop Le Pen from winning…

The French and European Deep State are warning of an economic catastrophe if Marine Le Pen wins the French election in May 2017…yet in reality, no matter who is elected, the economy is going to crash anyways. But if France wants to save itself, then they should circle the national wagons and protect their culture and way of life.

France needs to drop out of the Euro to regain its national sovereignty if they are going to survive down the road when the European Union crashes under deeper austerity measures through the American economic de-socialism agenda.

In fact, I would warn the people of France that if they vote for Macron, they will lose their nation to wealthy speculators in a privatization blitz that will leave the people of France impoverished without their social and health programs, which of course will be whittled away under Euro austerity and deep budget cuts due to having to “Borrow” its budget money with interest to provide the goods and services the country needs.

Macron is all for de-nationalizing industry and selling it to special interests, which is one of the ways in which a country is taken apart economically…that is what Macron has done in the past and will do in the future if he is elected. In reality, Emmanuel Macron is anti-national and anti-France…

The people of France have to realize that no matter what candidate they choose, the economic picture is going to be very bad…however, it would be in the French peoples best interests to not go down with the European ship and instead regain their national identity…get out from under the EU before France is crushed by a crippling debt and austerity…Protect yourselves with your own national central bank and monetary system…a monetary system owned by the French people…money that would not be borrowed for budget expenditures but created by the government OF the French People and spent into existence without debt or interest…regain your Industries and make your own trades…don’t let the USA / EU dictate who you can trade with…the election is in 2 weeks, so you can either choose the status quo candidate and Eurocrat “Macron” and fade away into a global soup of anti-culture, debt and austerity OR choose the nationalist candidate “Le Pen” and retain your historical, political and economic identity…the Future is yours to decide…What have you got to lose? Everything…
------------------ 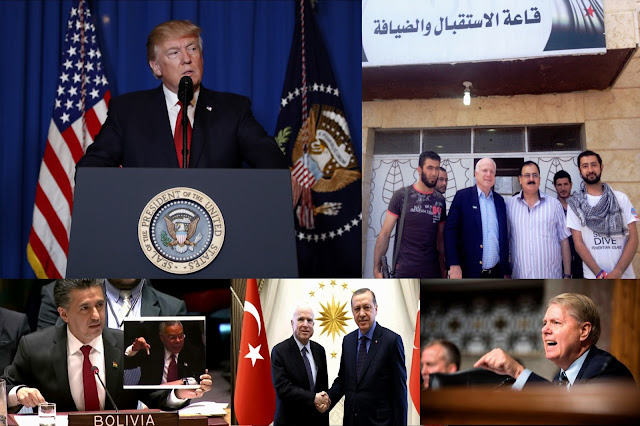 The US Deep State plans for Syria and the World, have not changed under the Donald Trump presidency. In fact, by his direct attack on the Syrian Military, Donald Trump just confirmed that he is a willing partner in the US deep state plans, so there will be no changes for the betterment of the American people or the world for that matter under Donald Trump.

US Terrorist Attack and Chemical Weapons Attack in Syria

The Donald Trump Government attacked the Syrian Military at the Shayrat airbase near Homs on April 6th, 2017, basing his reasons on unproven accusations of chemical weapons use by the Syrian Government in the terrorist held area of Idlib.

The results of this US Military attack on Syria puts us all on a runaway freight train that is driving in a head-on collision to World War III and the end of history.

War Crimes and the United Nations

Not only has Donald Trump committed a war crime for attacking Syria on unproven claims but he has also attacked the United Nations Charter, shredding it into a million pieces as the US refused to abide by International Law and deliberately bypassed the UN Security Council when they didn't get their way.

The first countries to stand up and congratulate Donald Trump for his State Terrorist actions were other United Nations members within the illegal American coalition against Syria. Criminal partners such as Israel, Turkey, Saudi Arabia, the UK, France, Germany, and Italy. (Among others)

As it stands now, the US and its warring coalition no longer uphold International law as the guiding principal, as they endorse the USA for breaking International law and the UN Charter which they swore to uphold…that means that the United Nations is dead…

So, who were the key people behind Trumps sudden decision to Attack the Syrian Military? An operation which had to be planned well in advance.

In my opinion pressure was directed by American deep state war hawks John McCain and Lindsey Graham who were the first to cheer Donald Trump for his belligerent actions. Both McCain and Graham are on record for their insistence of US Military support in arming the terrorist groups in Syria with the goal of removing Syrian President Bashar al-Assad. Both of these war hawks also became hysterical and called for US military intervention when their terrorist proxy armies on the ground began losing to the Russian, Iranian, and Syrian coalition.

These terrorists that are supported by Graham and McCain, have committed some of the most sadistic crimes ever committed by man, and still the US and its coalition members continue to support, arm and train this army of monsters…where does this lead to? Well it leads to more chemical weapons attacks to blame on the Syrian government since the last one worked so well for them…and who knows what other nightmarish operations they will unleash at their backer’s behest to blame on the Syrian Government.

These are cold blooded killers we are talking about, controlled by cold blooded killers in the US, UK, France, Saudi Arabia, Qatar, Turkey and Israel who stood up and applauded the American's war crime. It appears that they will stop at nothing to get their way in Syria as some nations such as Turkey are calling for more US attacks on the Syrian army. Of course, once again we are hearing the chorus of “Assad must go” by all the sociopathic leaders of these states.

If the US is so moral as they claim to be, why did they launch a massive military attack on Syria without proof of who committed the crime? Maybe, its because they are behind the crime themselves and are so desperate to have their terrorist army counter attack after being driven to the point of oblivion by Russia and the Syrian Arab Army, that they needed to commit this desperate false flag of terrorism to save their army of monsters from annihilation. If so, and I do believe this is the case, then this will not be the only US attack on the Syrian military, and that leads to conflict with Russia and Iran.

Russia and Iran are the other two nations that US deep state representatives McCain & Graham have been pushing to attack…so we now have to wait nervously to see what kind of nightmare these monsters will dream up next. Especially now that US and its NATO partners have thousands of tanks, military troops and other equipment in place around Russia and Iran. Let’s not forget America’s NATO partner Turkey, who has solidified their position in Northern Syria with direct supply lines of US coalition military equipment to the terrorists.

With Erdogan's military position now vulnerable in Syria after exposing himself as a loyal partner to the American Deep State and a deceitful partner to Russia, Turkey's leader, is screaming the loudest for the US to continue its military attacks on the Syrian Army.

There will be no change under Donald Trump as War seems destined to escalate under his “American war first” policy.

What Can You Do to Stop it?

The only ones that can stop this road to World War Three are the American people. They must rise up in their tens of millions and condemn the US governments military actions against Syria. Everyone should go on strike, not pay taxes, stop shopping...Call up your representative, fax them, text them, email them and confront them in public. Tell them to back off. Launch a twitter storm on Donald Trump. Form a movement to take back your country from these war mongering sociopaths that have hijacked the American nation. Pull your money out of the banks, boycott all the corporations pushing war, if you own some of their stocks, sell it, boycott their mainstream news propaganda channels including their advertisers…march against the Mainstream corporate media and surround their buildings. Occupy them! Call them out for their lies and propaganda. March on Washington, NY, Chicago, LA, push for people like McCain and Graham to be forced out of office on crimes of high treason!

People all over the World can also participate especially in the countries where their governments openly supported the US attacks on Syria. Call them, write them, email them, text them…Everyone can boycott American products. Just do it!

A very important book to help readers understand what is really happening in Syria as it takes you through Syria’s recent history and portrays the actual facts on the ground. This is a must read by all. ~ Stewart Brennan, Political Analyst & Activist 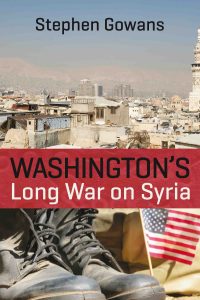 Link to Turkish Government Website - No:78, 18 March 2017, Press Release Regarding The Third Anniversary of The Illegal Annexation of Crimea
http://www.mfa.gov.tr/no_78_-18-march-2017_-press-release-regarding-the-third-anniversary-of-the-illegal-annexation-of-crimea.en.mfa

Posted by Stewart at 9:10 PM No comments: