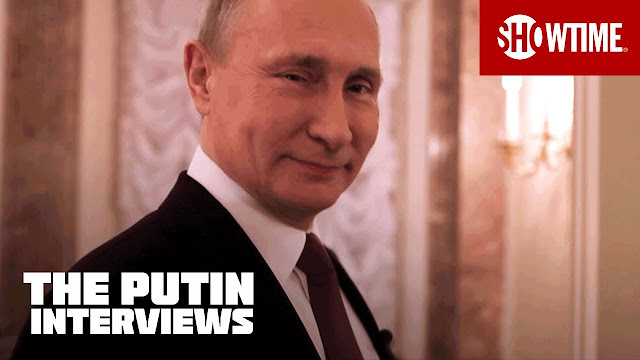 “The Putin Interviews” is a four-part series of interviews between iconic film maker Oliver Stone and Russian leader Vladimir Putin providing the World with an in-depth view and understanding of the Russian leader, world events and the insane push of western political and economic hegemony over Russia and indeed the world. This is a very important historical documentary which should be, in my opinion, shared with every North American and Western European. (See Download Link at the bottom of this article)

US Deep State NOT Happy About these Interviews

Indeed, the US deep state and its mainstream media are not happy about these revealing interviews as we have seen by the attitude of TV host's such as Stephen Colbert where he trashes Oliver Stone on Corporate TV for Stone's documentary; a documentary which shows the world a little sanity and reality on Russia and the Russian leader throughout the four part series.

Oliver Stone’s documentary brings serious attention to the whole false narrative that the US Deep State and its corporate media have concocted about Russia and their leader Vladimir Putin. It is my belief that the creation of a US enemy keeps the US Imperial war economy thriving while keeping the US economy afloat through endless wars which of course require endless amounts of weapons and material...and that is precisely what the US Deep State and its corporate Media are doing when they falsely target Russia and Vladimir Putin as the enemy of choice. In essence they are trying to revive a dead cold war foe who has been gone since 1991.

Why is the US Government demonizing Russia and Vladimir Putin?

Well, it seems that Russia is in the American's way of attaining global economic domination because Russia remains economically independent. Energy supply to Europe is certainly a key factor in US hostilities towards Russia, so much so that the US government and Pentagon will stoop to the pits of hell to get Russia to cave to their demands.

The US position is nothing more than a suicidal pact with insanity which must be stopped by all means...and indeed, information such as what these interviews hold is the key to removing the poison inflicted by a truly biased and repugnant American mainstream media.

Below is the Colbert Interview of Oliver Stone

In an article written by John Wight on RT, he calls out “Colbert” and the US establishment for its insane position. Here's an extraction from his post...

"...Colbert’s line of questioning amounted to a regurgitation of the very caricature that Stone had set out to move beyond in over 20 hours of interviews on an abundance of topics with Putin – his upbringing, family history, career, thoughts on leadership, the challenges Russia faced during the dark days of the 1990s, his relations with various US presidents, NATO, and so on.

Yet for the likes of Mr. Colbert it’s much easier to go with the official narrative, contained in his first question of the interview: “What do you say to people who say that yours [Oliver Stone’s] is a fawning interview of a brutal dictator?” Not only the question, but also the casual and insouciant way in which it was delivered, confirmed the dumbing-down of news information, analysis and commentary that has been underway in the United States over decades.

The result is a culture so intellectually shallow it is frightening to behold, one in which ignorance is celebrated rather than scorned, in which national exceptionalism and arrogance is exalted rather than rejected. And woe betide anyone, such as Oliver Stone, who dares try to penetrate this fog of ignorance and sense of exceptionalism that has so corroded US cultural values...."

Freedom of Speech, Truth and Justice

As a person who believes in truth, honesty, peace, and justice, it is my position not to believe anything I am told by the US deep state, its government or its bought and paid for corporate news and entertainment industry simply because they've been caught lying time and again. How can anyone have trust in a government or medium that consistently lies? If people want the truth, then it is best to investigate everything going on in the world using the internet to uncover the truth.

Today, people are no longer held in a bubble of a nations propaganda because the internet provides everyone with the freedom to share their views and investigations, unlike the US corporate media who are employed to spin a narrative based on the economic interests of a few powerful people.

The battle for truth and justice has taken a great leap forward by alternative media, independent writers, investigative journalists all over the world, including important film makers such as Oliver Stone and his latest work, "The Putin Interviews".

It is important for everyone to investigate what is really happening in the world before the US economic deep state drag’s the world into another major conflict on the back of outlandish lies…we have a responsibility to our children, grandchildren and their future generations, to provide them with a real future…it's time for everyone to get their heads out of the sandy illusion that western media has spun…start investigating reality for yourselves or we simply will not have a future at all. 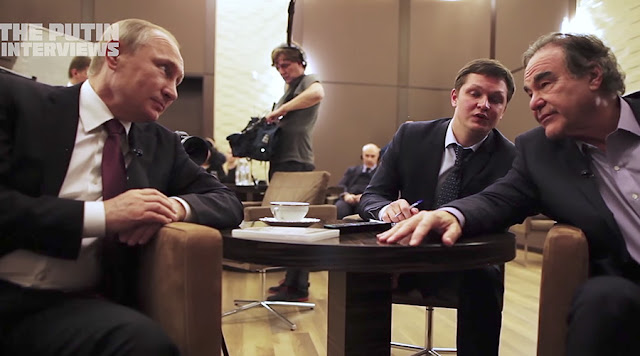 Posted by Stewart at 9:23 AM No comments: