End of the US Unipolar Empire 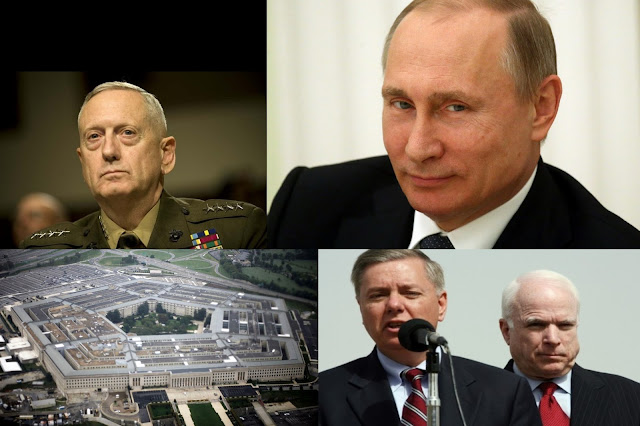 In one stunning speech to the Russian Federal Assembly on March 1st, 2018, Vladimir Putin revealed Russia’s new advanced weapons systems that, in a nutshell, checkmates the entire US Military position and ends their threat of a first strike policy. The US government, its Pentagon and Intelligence agencies were indeed served notice that “The Russians are Back” and they are stronger than ever. In short, it was a very calm but firm “Say hello to my little friends!” moment.

Yes indeed, the Russians are back bringing a balance of power and a little sanity to a world that has been brutally bullied by a belligerent unipolar American super power for far too long.

In Vladimir Putin’s address, he unveiled new weapons with advanced technology such as miniature nuclear powered engines that are not only a game changer, they are a wake up call to an arrogant war mongering American government.

Hopefully Putin’s words were carefully listened to and not shrugged off by a bad case of American hubris. Maybe, just maybe Putin’s words will let in a little light and allow some of the saner voices and opinions to be heard inside the US Pentagon and Capital Hill.

Vladimir Putin confirmed that the “Sarmat ICBM” would replace the older but formidable SS-18 “Satan” still considered one of the most powerful weapons in the world.

Then he turned to new weapon systems such as:

Russia’s new hypersonic gliding warhead called ‘Avangard’ can reach the speed of Mach-20 and has high maneuvering capabilities that make it immune to all anti-missile weapons existing today. The video showing the new weapon was computer-generated to keep its actual appearance secret.

The missile is launched from an aircraft and reaches a speed of Mach-10 while maneuvering to pierce through anti-aircraft systems. The weapon can be fit with a conventional or nuclear warhead.

Aftermath of this stunning announcement:

Even though the American’s do not have anything close to this technology, we could say that there is once again in the world a balance of power. Russia clearly has the upper hand but at the same time Russia offers the hand of peace and cooperation which the USA does not. Will the US government accept Russia or anyone else as an equal partner, or will they keep shouting that the Russian's have started an arms race?

Russian President Vladimir Putin has denied accusations he revived an arms race by unveiling Russia’s new nuclear deterrent. In actual fact, the start of an arms race was done by US President George W. Bush who killed the 30-year-old ABM missile treaty in 2002. Russia merely responded to the constant NATO encroachment and blatant US military threats to protect the Russian people from a proven war monger.

Overall, the annual message to the Federal Assembly (and the world) was one of peace and an invitation for antagonistic countries such as the USA to negotiate. The hand of peace and friendship has always been offered by Vladimir Putin but never accepted by the US Pentagon because they need a villain to justify their huge defence budget.

The Western mainstream media only aired little snipits to make Vladimir Putin’s speech sound menacing, ie: they endorse the US governments defence spending position by helping to create the artificial threat which is why they never broadcast Vladimir Putin’s entire speech. This proves, once again, that the western media are not information news outlets but propaganda mouthpieces for the US Pentagon, corporate interests and US secret services. In doing so, the US mainstream media undermines US democracy by not keeping their citizens truthfully informed.

On March 2nd, Vladimir Putin was in the Kaliningrad region speaking to a forum of journalists. Then on March 3rd, he was back in Moscow at Luzhniki stadium, with thousands of voters gathered for an election campaign event. (Russians go to the polls on March 18th.)

Will the saner voices of reason prevail within the US Government and Pentagon? Or will rabid US military mad dogs continue to press forward with their aggressive militaristic behavior towards Russia or any country for that matter that desires to express its economic independence from the US dollar?

I guess we are going to find out sooner rather than later. But one thing is for sure, the US economic position is now in a quicksand of its own making; more-so now as US President Donald Trump launches an economic trade war which historically leads to real wars. The question is, will Vladimir Putin’s warning be enough for the American’s to finally focus their attention on their own domestic economy or will they continue their suicidal race for global economic domination?

Here is Vladimir Putin’s full speech which is his annual presidential address to the Federal Assembly in Moscow. Members of the government, both houses of the Russian Parliament, other officials and public figures gathered at the Kremlin’s St. George Hall for the event.

Posted by Stewart at 9:17 AM No comments: