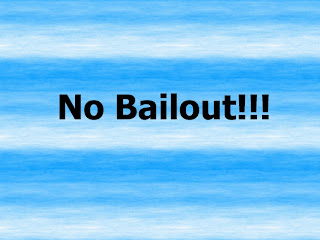 The Senate is Bypassing the House of Representatives to vote on the
BAILOUT Wednesday evening, which is Stealthily Attached To Revenue Bill!!

CALL NOW: NO BAILOUT!
Please send this message out to EVERYONE, not only here but on your
email list!

The Senate is ignoring the House of Representatives and will be
voting today on passing the bill...

Because the bill must originate in the House, the Senate is attaching
the rescue plan to a bill that deals with renewable energy tax
incentives. This would allow the Senate to vote before the House.

OR to find your Representative' s number, go to
http://www.house.gov/%3Ehttp://www.house and enter your zip code.
And why not send 'em an email while you are at it (BUT MAKE THE CALL FIRST)

"Dear Senator/Representative: You MUST reject the Paulson/Bernanke
plan for bailing out and propping up reckless banks at taxpayer
expense. This is madness to ask us, the taxpayers, to cover the
liabilities of Wall Street. We are tired of being fleeced. If you
vote to support this plan, I will do everything in my power to remove
you from office before you can give away any more of our money to
failed businessmen.

~~~
The above article(s) &/or letter(s) are accessible through links on
the http://whatreallyhappened.com/%3EWHAT WHAT REALLY HAPPENED website For
a variety of opinions on what's really happening around the world,
visit frequently...and

The last official act of any
government is to loot the
nation!

The following is a statement by David Rockefeller (founder of the
Trilateral Commission), in an address to a meeting of The Trilateral
Commission, in June, 1991:

"We are grateful to The Washington Post, The New York Times, Time
Magazine and other great publications whose directors have attended
our meetings and respected their promises of discretion for almost
forty years. It would have been impossible for us to develop our plan
for the world if we had been subject to the bright lights of
publicity during those years. But, the world is now much more
sophisticated and prepared to march towards a world government. The
supranational sovereignty of an intellectual elite and world bankers
is surely preferable to the national auto-determination practiced in
past centuries

The Federal Reserve has told a large number of Countries to authorize their central Banks to buy up American dollars. The Fed said they would make the money available immediately. The European Union is in for 240 Billion, bank of Canada 30 billion, and on and on. Think about this for a second…if they flood the market in American money, the US dollar will become worthless.

Add, the 700 billion bailout, the 600 billion needed to keep the government working, 300 billion for the Wars in Iraq & Afghanistan, and then who knows how many billions afterwards to put in an empty credit hole. That’s on top of the money the Fed is printing for other countries to buy up, not to mention the 10 Trillion already in the hole with COMPOUND INTEREST!

Since the dollar is based on how much of it is out there, I would have to say Total Economic Depression...which is what they wanted in the first place! The goal of these bastards is to sink the economy. The greedy will not suffer in fact they are having a feeding frenzy on ALL of us. They get to go home with more assets at the end of the day…purchased at mere pennies on the dollar.

The solution THEY have waiting for everyone when the smoke settles and everyone is beaten into submission by the scourge that an economic depression brings, is a cashless system, or to be more specific, Credit chips. …No Bailout!