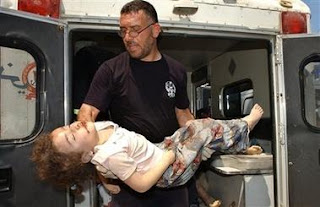 End the Israeli Genocide of the Palestinian People! ISRAEL IS COMMITTING War Crimes and Crimes Against Humanity. Send a letter to The International Criminal Court of Justice and call for A War Crimes trial against the Israeli government and ANYONE THAT IS SUPPORTING THEM.


The International Criminal Court of Justice.

"The Office of the Prosecutor" at the International Criminal Court of Justice.
otp.informationdesk@icc-cpi.int

Below you will find my letter to the Office of The Prosecutor. Please feel free to copy it or write one of your own. The Children of Gaza need our help right now!


Your Honor, Please, I beg of you to hear my sincere plea for help.

Israel is committing War Crimes, and Crimes Against Humanity in Gaza on the Palestinian people and must be stopped immediately.

Remembering the words of Chief Justice Jackson during the first War Crimes trial held in Nuremberg Germany in 1946.

“The privilege of opening the first trial in history for crimes against the peace of the world imposes a grave responsibility. The wrong’s which we seek to condemn and punish have been so calculated, so malignant, and so devastating, that civilization cannot tolerate their being ignored, because it cannot survive their being repeated.”

If humanity is to survive and progress, we must take swift and legal action on Governments that employ Crimes on Civilian Populations such as the crimes being committed in Gaza by the Israeli Government. It is not acceptable to wait until these Israeli crimes are played out because many of the men, woman, and children in Gaza will not survive this brutal genocide. Let us not get caught up in words, because action is required immediately. Aggressive War is a Crime, and targeting a civilian population in War aggression is a “Crime Against Humanity”.

The integrity and embodiment of the United Nations has come under attack by the absolute refusal of Israel to cease its War agenda by continuing to attack the Palestinian general population, UN convoys, civilian shelters, hospitals, schools, and all Palestinian Infrastructure. The very survival of the United Nations body will come into question if it is powerless to put a stop to a genocide that is taking place.

If the I.C.C.J. does not inform and take action against Israel for the atrocities they are committing on the Palestinian people then the United Nations will have failed Humanity and we will descend in to very dark times. The International Criminal Court of Justice is the one beacon of light that remains in our War torn World, and granted, there are many cases before the Court, but you MUST speak out NOW! As a Human being, I demand that the International Criminal Court of Justice stand up for the innocent people in the Gaza Strip! If need be, ask a neutral power of the Security Council such as Russia, to send a peace keeping force into Gaza. Do something before it is too late for the thousands of innocent men, women, and children.


Office of the High Commissioner for Human Rights
http://www.ohchr.org/EN/Pages/WelcomePage.aspx

Please join our letter campaign and put an end to Israel's evil aggression!
Posted by Stewart at 4:06 PM No comments: