The Plutocracy’s Hidden Agenda on Iran 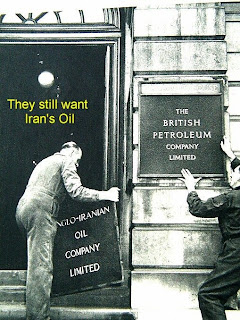 I am sure you have noticed all the negative attention that Iran has received over the last few years especially now after the recent Iranian election. It’s not hard to see all the hyped up one-sided reporting by, dinosaurs like CNN FOX, NBC, CBS, and ABC. These Deep State propaganda machines have been helping their owners push an aggressive agenda against Iran since the 1950’s. Of coarse CNN & FOX were not around then but their current owners sure were.

With any luck, Americans will awaken from this programming and turn off their TV’s before these monsters succeed in brainwashing them into another War…

The USA are not the only country saddled with this type of agenda, in fact Canada, my own Country, has been infiltrated with scumbags that have seized control through the Conservative and Liberal Parties. A dictatorship has arisen in Canada that pushes a false position of the Canadian people…and our media is in collusion with this agenda. The CBC and CTV are controlled by the same corporate and political lobby groups as their counter parts in the USA. In short, our countries have become dictatorships ruled by corporate and political lobby groups that push their agendas through their bought and paid for media.

The media are controlled by interests with very deep pockets and their agenda is total political, economic, and social control of the nation. Those behind the scenes, have an agenda on Iran that has not changed since BP hijacked the Iranian oil fields in the 1920’s! The Oligarchs lost control of the Iranian Oil fields in 1979 when the Shah was deposed. They desperately want Iran's Oil back and will continue in collusion with Israel to dominate the Middle East until they get it. Don’t be fooled into believing what they report because it is nothing but a one-sided smear campaign against the rulers of Iran, initiated by the Plutocracy for control of the oil.

What are the facts?

(02) Ever since the Ayatollah Khomeini and the Iranian people tossed out Dictator Mohammad Reza Pahlavi better know as the Shah in 1979, the US military Industrial complex has been planning their way back into Iran to take their Oil.

(03) Israel has been calling for military strikes on Iran for building a Nuclear reactor that will alleviate Iran’s severe shortage of electrical power.

(04) The CIA has been conducting destabilization plans within Iran for the last two years. Funded with hundreds of millions of dollars that Dick Cheney & George Bush funneled into covert CIA operation programs such as, “The National Endowment for Democracy”.

(06) Rafsanjani is associated with the Iranian Business Class (OIL lobby) and is openly hostile to Ahmadinejad.

(08) The Western Media have conducted a smear campaign of corruption against Ahmadinejad and favored Mousavi and a westernized Iran.

I ask you, “Why did opposition leader Mousavi claim political victory within 4 hours of the polls closing?” Why does the “twitter defiance” link back to Israel on June 13th? Why is the western media pushing their one sided reporting of a small pro western group as the victims of electoral fraud?

The word on the street is that Israeli mossad assisinated “Neda". Neda is a Farsi word for voice. However, western media claim she was allegedly shot dead by a Basij soldier. Why do you think the media are pushing a one sided story?

Have you thought about this? Did you let them form your opinion? Or did you seek out the truth by researching the last 100 years of history? The sheep always let the TV decide their thoughts. An awakened mind will do research and allow their intellect to form conclusions based on the facts. “OIL has everything to do with one sided propaganda reporting by corporate news and their sponsors.”

A strengthened Iran is a threat to the Plutocracy’s greedy agenda of total economic control. To them Iran will always be an enemy until the IMF and World Bank have full control of the Iranian monetary system and the Western Military Industrial Complex has full control of Iran’s Oil.

Dick Cheney and George Bush were hell bent on attacking Iran and had met with Israeli officials to plan their attack back in 2007 and 2008. They did not trust the incoming administration as you may recall and decided to leave ALL options on the table. Including military strikes. They decided to fund covert operations to destabilize Iran through programs like “The National Endowment for Democracy” or the “Open Society Institute” chaired by George Soros. Remember George Bush’s speech in December 2007; about a third World War, and mushroom clouds?

I would like to point out that Iran has been a peaceful Country for a very long time. For those that disagree, I would then ask you, “When was the last time Iran invaded another sovereign Country?”

Until recently, Iran had been in a positive light and grew by leaps and bounds in internet popularity especially when compared to Israel. After all, Israel destroyed Gaza and murdered 1,500 people many of them children after a lengthy starvation blockade not seen since the World War 2 Warsaw Ghetto blockade.

Iran grew in popularity with the common people of the Western World and had the US and Israel seething in hatred because U.S. / Israeli plans of domination for the Middle East and the World had been derailed. They were, and continue to be, desperate to regain control of people’s minds through planned information. Israel and the US will stop at nothing to get what they want, and that is why we now see one-sided views of protests in Iran. Notice the signs of the pro western youths were written in English and touted by the MSM as the opinion of the majority of Iranians. These one sided reports were nothing more than a propaganda build up of planned suggestion to take control of a western television audience 's opinion.

The once powerful M.S.M. or mainstream media with its pro Israeli propaganda stance has been way laid by the publics thirst for the truth and accuracy in reporting. The catalyst to their end is of their own making. It was the aggressive and brutal attacks by Israel and the USA on the sovereign people of Lebanon, Iraq, Afghanistan, Pakistan, and Palestine that has woken up the sleeping silent majority called humanity.

More and more people have turned to the Internet for their news and information, and turned away from old dinosaur propaganda Titans like CBC, ABC, NBC, FOX, and CNN because of their glaringly obvious one sided reporting. Over the last 8 years, these mainstream media bigots have become drunk and disorderly rude with anger on their TV entertainment news programs with an agenda to sway populations to their ignorance. They are completely repulsive and lack any kind of morality, truth or respect.

The thirst for truth has logged a whole generation onto the Internet with a desire to investigate information and seek out both sides of a story. Truth seekers ask many questions that are never asked by the mainstream media and it is this line of questioning that un-nerves the Plutocracy in charge of our nations. The search for truth should be viewed as a noble act not as a terrorist ploy. When truth is treated as a crime, we will then be living in a police state. Indeed, that is where we are today.

“The pursuit of Truth is a quest by people that have higher moral standards than the actual class that seeks to silence them.”

Have we not evolved over the last 2000 years? Are we to continue on this road of ruination and repeat the fall of Rome? The quest for power and insatiable greed with immoral reasoning that the Plutocracy has taken will lead to the Fall of Rome but it will echo 10,000 fold as the World falls to systematic planned division and World conquest.

The Western World, lead by the USA and its Israeli lobby, are pushing for control of the Worlds diminishing oil supply. It is OIL that powers growth in an economy and fuels military expansion. Right now, Independent Russia and their Independent allies control a large part of the Worlds Oil, friends that include Iran and Venezuela. The USA is NOT happy with this prospect, and has taken to drawing lines in the sands of the Middle East. We are being subjected to intense propaganda designed to make us choose a side in their pending conflict. The World is in an economic tailspin brought on by the Plutocracy’s insatiable thirst for power, and it is no secret that Israel wants to attack Iran.

If the Plutocracy continues to enforce their will and control over the entire planet, conflict will increase exponentially wherever they try to enforce their dominance. However, the public has become more educated and given rise to revolutionary ideas like peace, morality, and common sense. The Plutocracy fears a public armed with knowledge, especially when their own master plan of absolute control has been exposed.

But it is their fear that we should be most worried about, because fear will make a man do desperate things, and with an arsenal of weapons to cull the perceived threat to them, they will attack first for their lack of a moral conscience. The very few influential people that control the game of life such as, Ted Turned, David Rockefeller, Zbignew Brzezinski, Prince Phillip and others have come out with statements of population reduction as a preferred method of population control.

The Western media have crossed the line and require a massive lesson in common courtesy and respect for the global population.

I say lets choose a different way. Let us start rebuilding community. Offer your hand in friendship to someone, who like you, is only trying to live their life. Let us change the system that governs us. Turn away from mainstream media and television. Get yourself online to communicate with other people around the world. Do your own research to get the information they refuse to show you. Get others involved. Use common sense and reject their fear mongering. All we need is each other to make this World work. We don’t need them. They need us.

Have a great day!

By; Stewart Brennan
Posted by Stewart at 12:03 AM No comments: