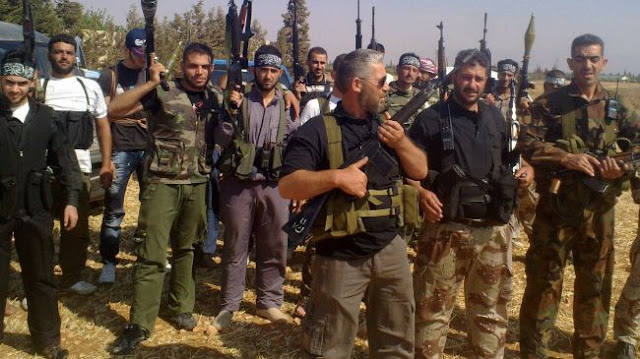 A handout picture shows foreign-backed militants in the western Syrian city of Qusayr on July 11, 2012


The notorious US security firm Blackwater has set up military camps in Turkey’s border region with Syria to train armed groups fighting against the government of Syrian President Bashar al-Assad.


A report published by the Turkish newspaper Idinik said Blackwater agents have been operating at the border area and that the firm’s mercenaries are being deployed to Syria via the Turkish province of Hatay.

Syrian security forces in the western city of Homs have also said that the Israeli spy agency, Mossad, the US Central Intelligence Agency (CIA), and Blackwater are involved in the country’s unrest.

The idea of Blackwater’s role in the Syrian unrest developed after Egyptian writer Mohammad Husayn Haykal said that the firm has more than 6,000 mercenaries operating against Damascus inside and outside the country.

Haykal described Blackwater's activity inside Syria and along the country’s borders as a bid to buy time for Israel and to turn the Arab-Israeli conflict into a sectarian conflict between the Shia and Sunni Muslims.

Syrian expert in strategic affairs Salim Harba has also said that an anti-Damascus center has been established in Qatar to bring together US, French, Qatari, Saudi, and Israeli intelligence agents as well as members of Blackwater, and the Syrian opposition.

The advanced weaponry used by the armed gangs in Syria, the presence of foreign mercenaries among the rebels, and documents leaked on the involvement of Blackwater in the crisis in Syria indicate that the so-called security firm is after fueling violence in the Arab nation to help the US topple the Assad government and thus more efficiently protect its interests and those of Tel Aviv in the region.