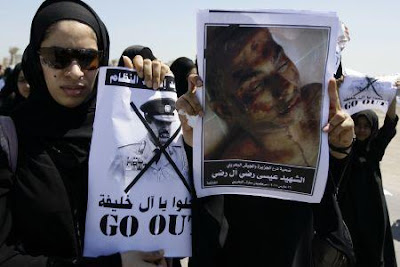 Bahraini Shia women hold up pictures of King Hamad and a slain activist during his funeral in the town of Sitra outside the capital, Manama on March 20, 2011.

A former Bahraini lawmaker says that around 100 people have gone missing during the Manama-ordered crackdown on the countrywide popular revolution.

He made the comments during a short protest in front of the United Nations building in the capital, calling on the world body to make sure rescue medical services operate in the Persian Gulf kingdom.

Demonstrators in the Shia-majority country have been demanding the ouster of the Sunni-led Al Khalifa monarchy as well as constitutional reforms since February 14.

The government recently razed the capital's Pearl Square, where hundreds of protesters had been camping.

At least 12 people have been killed and about 1,000 injured since the start of the anti-government protests during the government-backed armed attacks.

On Thursday, the United Nations High Commissioner for Human Rights Navi Pillay denounced a new move by the government to take control of the country's hospitals amid the killing and injuring of protesters by the security forces.

"There are reports of arbitrary arrests, killings, beatings of protesters and of medical personnel, and of the takeover of hospitals and medical centers by various security forces," she said.

Manama recently sought the help of Saudi Arabia and the United Arab Emirates to further suppress the protests.

Violence has intensified against the demonstrators ever since the deployment of Saudi and Emirati forces in Bahrain.