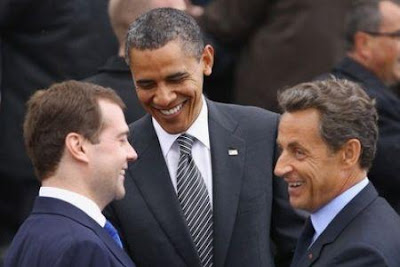 US President Barack Obama (c) , French President Nicolas Sarkozy (R) and Russian President Dmitry Medvedev greet as they arrive in France for G8 summit on May 26

Russia has accepted to play a mediation role to end the crisis in Libya, a day after Moscow was urged to step up diplomatic efforts in the North African country.

"Our task is to find such a formula under which both sides would find it acceptable to agree to an immediate ceasefire, which for its part would pave the way for the end of the coalition's military operation," AFP quoted Russia's Deputy Foreign Minister Sergei Ryabkov as saying on Friday.

In accordance with a UN mandate passed in April, NATO has carried out hundreds of airstrikes to enforce a no-fly zone over Libya to guarantee the protection of civilians.

Russia has been critical of the Western alliance's military operations, saying the attacks have caused civilian casualties.

In bilateral meetings between Russian President Dmitry Medvedev and his French and US counterparts during a summit of the Group of Eight (G8) in France, Moscow was asked to mediate the Libyan crisis, Moscow's special representative to Africa, Mikhail Margelov, said.

Despite talks of mediation, US President Barack Obama said after meeting French President Nicolas Sarkozy on Friday that Washington and Paris are determined to “finish the job” in Libya.

The US, France and Britain have said they will continue the military operations in Libya until Libyan ruler Muammar Gaddafi quits power.

A statement by G8 members emphasized that Gaddafi must relinquish power since his regime has lost all legitimacy.

Libyan government has rejected decisions by the G8 members, saying any initiative to resolve the conflict in Libya should go through the African Union (AU). The Gaddafi regime has also dismissed Russia's mediation.

The AU has once again called for a political solution to the crisis in Libya. However, revolutionary forces have rejected the AU's ceasefire plan, saying they will continue fighting to see Gaddafi out of power.