Georgians call on president to resign 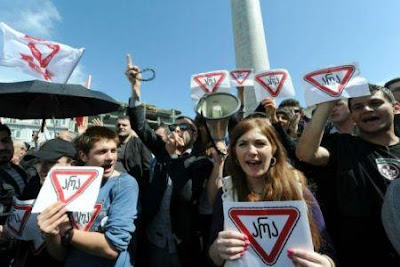 Thousands of Georgian protesters have taken to the streets of the capital Tbilisi, calling on President Mikheil Saakashvili to step down.

Protesters led by former Saakashvili ally and parliament speaker Nino Burjanadze marched along Tbilisi and staged their rally at the central Freedom Square.

Georgian police fired rubber bullets at opposition protesters in Tbilisi in an attempt to disperse the demonstrators after they reportedly attacked a car and beat its passengers.

Meanwhile, hundreds of other protesters marched through the Black Sea resort of Batumi, where their demonstration was broken up by police after protesters tried to break into a local television station, AFP reported.

"We are fighting for democracy and against neo-Bolshevism," Burjanadze went on to say.

"We demand Saakashvili's resignation in order to hold democratic elections," she noted.

The opposition has accused Saakashvili of monopolizing power and losing large parts of Georgian territory during the country's brief war with Russia in 2008.

The Saakashvili government is also being blamed for failing to tackle poverty.

"We will fight to the end together with you. It is the final and decisive fight for all of us and we are not going to make any steps back," Burjanadze told the crowd.

The opposition National Assembly also accused the officials of detaining scores of government opponents and seizing hundreds of activists' cars before the rallies.

The Georgian interior ministry, however, said the allegations were "completely untrue."