AIPAC demands US partiality to Israel 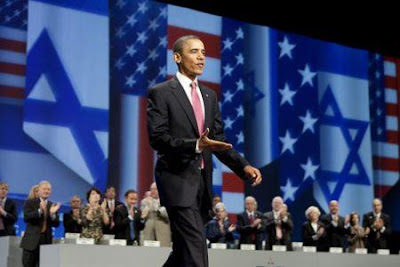 The head of the American Israel Public Affairs Committee (AIPAC) has openly called on US President Barack Obama to avoid an “even-handed” approach to the issue of Palestine.

"When the United States is even-handed, Israel is automatically at a disadvantage, tilting the diplomatic playing field overwhelmingly toward the Palestinians and Arabs," said AIPAC's Executive Director Howard Kohr, quoted by Israeli daily Ha'aretz on Monday.

Kohr made the remarks a day after Obama addressed an annual AIPAC conference in Washington, where he clarified his remarks regarding his vision of a two-state solution based on the 1967 borders.

During his so-called Middle East policy speech last week, Obama asserted that the borders of Israel and a future Palestinian state should be based on the 1967 lines.

The speech, however, provoked an immediate response from Israeli Prime Minister Benjamin Netanyahu, who opposes the formation of an independent Palestinian state based on the borders before the 1967 war, claiming that in such case, the Israeli regime would be left defenseless.

Following Netanyahu's harsh criticism of Obama's suggestion at the White House, the American president used his AIPAC address to claim his earlier remarks meant that Israel and Palestine would negotiate a border "that is different than 1967.”