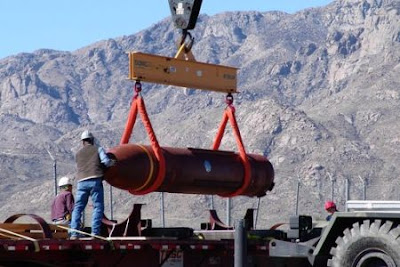 War planners at the Pentagon are stepping up efforts to make the largest conventional bomb more powerful in order to use against Iranian nuclear facilities.

The 30,000-pound "bunker buster" bomb, known as the Massive Ordnance Penetrator, was specifically designed to take out the facilities built by Iran deep underground for its nuclear program, The Wall Street Journal reported on Saturday.

However, initial tests showed that the earth-penetrating weapon, which is built by Boeing Co., was not capable to destroy Iran's underground compounds, either because of their depth or because new fortifications prevent any harm to them.

The findings prompted the Pentagon to submit a clandestine request to the Congress this month, urging more fund to increase the penetrative force of the bomb into rock, concrete and steel before explosion.

American officials say the push for a more bunker buster bomb is part of the contingency planning for a possible strike against Iran's nuclear installations.

The US Defense Department has spent about USD330 million so far to develop about 20 Massive Ordnance Penetrators. The Pentagon is seeking about USD82 million more to enhance the bomb's penetration ability.

The United States, Israel, and some of their allies accuse Tehran of pursuing military objectives in its nuclear program. Washington and Tel Aviv have repeatedly threatened Tehran with the "option" of a military strike against its atomic facilities.

Meanwhile, the UN Security Council -- under pressure from Washington and Tel Aviv -- has imposed four rounds of sanctions against Iran. The United States and the European Union have also adopted unilateral measures against the Islamic Republic in an effort to deter Western investment in Iran's energy sector.

Iran argues that as a signatory to the Non-Proliferation Treaty and a member of the International Atomic Energy Agency (IAEA), it has every right to develop and acquire nuclear technology for peaceful purposes.

The IAEA has conducted numerous inspections of Iran's nuclear facilities but has never found any evidence indicating that Tehran's civilian nuclear program has been diverted to nuclear weapons production.