Romney profited from mortgage lenders that foreclosed on thousands 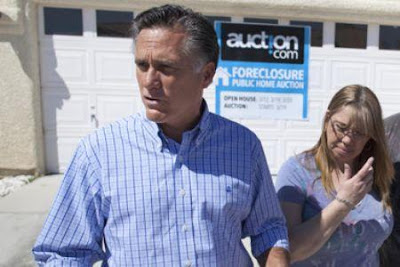 Republican presidential candidate Mitt Romney and his wife, Ann, saw profits by sinking millions into a Goldman Sachs fund that invested in mortgage-backed obligations, which were owned by lenders who foreclosed on thousands of Floridians.

By examining the candidate's May 2011 financial disclosure forms, Think Progress determined that Romney and his wife invested at least $2 million in the Goldman Sachs Strategic Income Fund (institutional class). In 2011, about 24.5 percent of that fund was invested in mortgage-backed obligations. Another 8 percent was invested in banks.

The former private-equity executive and Massachusetts governor earned more than half his income from capital gains and dividends, which are taxed at a top rate of 15 percent, rather than the 35 percent top rate for ordinary income, the filings showed. He donated $7 million to charity in the last two years, including $4.1 million to the Mormon church. sfgate.com

Since Romney did not list the fund on his 2007 financial disclosure forms, it is safe to assume he made the investment - and reaped the rewards - after the financial meltdown that began in late-2008. santarosademocrats.com

In October, Romney suggested that the solution to the foreclosure crisis was "don't try and stop the foreclosure process. Let it run its course and hit the bottom." While that process is bad for Florida homeowners, these investments show it may have been good for the Romneys. thinkprogress.org

Think Progress' Josh Israel concluded that "these and the other owners mortgage-backed securities included in this fund likely have attempted to foreclose on tens of thousands of Floridians." thinkprogress.org

An examination of civil cases filed in Miami-Dade county alone, by just the current owners of the mortgage obligations for now-defunct Washington Mutual and Countrywide, suggests more than 5,000 foreclosure cases were filed in 2010.