Panetta: No options off table on Iran 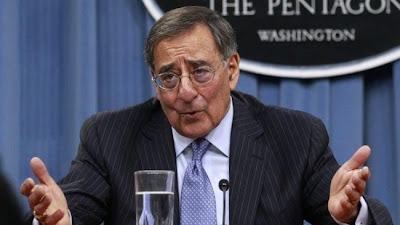 US Defense Secretary Leon Panetta has once again threatened Iran with a military strike against the country's nuclear facilities despite the IAEA inspectors visiting Iran.

"There are no options that are off the table," he made the comment on the CBS when asked if military action was being contemplated about Iran.

The war rhetoric by the Pentagon chief comes as a delegation of the International Atomic Energy Agency arrived in Tehran on Sunday to visit Iran's nuclear facilities.

Panetta also predicted that Iranians could develop a nuclear weapon within about one year "if they decided to do it."

He added that it would probably take Iran another two to three years to produce a missile or other vehicle that could deliver the weapon to a target.

"If they proceed and we get intelligence that they're proceeding with developing a nuclear weapon, then we will take whatever steps are necessary to stop it," he warned.

Tehran has rejected the report as "unbalanced, unprofessional and prepared with political motivation and under political pressure by mostly the United States."

The US and Israel have repeatedly threatened Tehran with the "option" of a military strike, based on the allegation that Iran's nuclear program may include a covert military aspect, a claim strongly rejected by Tehran.

The IAEA delegation headed by Herman Nackaerts previously traveled Iran in August 2011 and visited Natanz and Fordo nuclear facilities as well as the fuel production plant in Isfahan, the Bushehr power plant, and the heavy water research reactor in Arak among other sites.

Despite Iran's transparency in dealing with the IAEA team, Nackaerts prepared an anti-Iran report in November 2011, which echoed baseless US allegations.

Nackaerts violated the UN nuclear agency's regulations by providing data such as Iran-IAEA official letters, and satellite images of a military base in Tehran's Parchin district, to the IAEA Board of Governors and Reuters.