US Complicit in Terrorist Oil Trade with Turkey 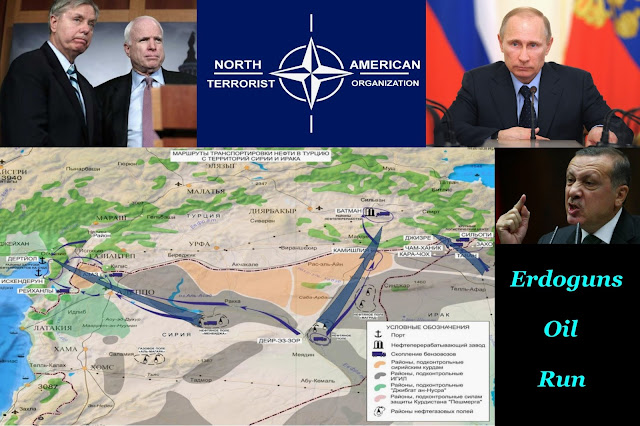 How is it that the American Military cannot see the terrorist oil operations on the ground in Syria and Russia can? That’s the question US news media personnel should be asking themselves and then asking their government…but alas, there really isn’t a news media in the USA anymore unless you go online and look for the alternative media. The American mainstream media is nothing more than a military corporate propaganda mouth piece that is staffed by spineless washouts who’ve sold their souls and moral compass’s for 30 pieces of silver…the American Media is owned by special interests with deep pockets and they are in collusion with the US Pentagon and corporate America.

The 6 Corporations That Control Your Perception of World Events (2013)

No wonder the US population has no clue about what is going on in the world, and it also explains how special interests run the entire geopolitical show. Is there any doubt?

The US Military is Protecting the Terrorists, not bombing them.

It has become quite obvious that the US military is not interested in destroying the terrorists they claim to be bombing. Especially when their targets are the Syrian infrastructure and not the terrorist oil pipeline that goes into Turkey via hundreds of trucks everyday.


The US government does not care about the Syrian people, if it did, they would not be bombing the vital infrastructure that keeps the people alive…

The US & Turkish governments also deny having any knowledge about the illegal oil trade going on under their noses. Oh really? So, how is it that the Russians, who have one military base in the region, can provide all the evidence of the illegal terrorist oil truck pipeline in stark detail, and the Americans who have 100 plus military bases throughout the region, along with dozens of satellites, and a fleet of hi tech drones, cannot provide any intelligence on the terrorist practices? Come on, who are they kidding??…And how is it that Turkey doesn’t know about what is going on in its own country? Especially when they have an extravagant spying system in place throughout the country…just say the words “Kurdish Independence” or “Armenian genocide” and see how fast some state thug shows up at your door to arrest you…oblivious indeed…pfffft.

Can the Americans really claim that they didn't know about the illegal terrorist oil pipeline between Syria and Turkey where their so called moderate terrorists are, trained, supplied, and set upon the Syrian people?

The Americans back the terrorists and the Turkish government on a number of levels, from oil smuggling, military weapons supply to the looting of Syria’s cultural history and artifacts. The terrorist smuggling operations run all the way into Turkey from the terrorist positions in Syria!

However, Russia spoiled American, and Turkish regional plans when they began bombing terrorist positions and supply lines...this has really pissed off war mongering Senators like John McCain & Lindsey Graham. They have been seething in anger since the Russians seized the American "war on terror" away from the US Military in Syria where the Russians were doing what the Americans were never doing, "bombing the terrorists"…

McCain reacted to Russia’s announcement that it had begun launching air strikes targeting ISIS militants in Syria by calling on the White House to arm Syrian rebels with weapons to shoot down Russian planes.

McCain initially responded to Fox News host Neil Cavuto’s question about whether he would shoot down Russian planes by saying no, but then went on to assert that he would arm Syrian rebels to carry out that very same task.

“I might do what we did in Afghanistan many years ago, to give those guys the ability to shoot down those planes, that equipment is available,” said McCain, adding that the Free Syrian Army would shoot down the planes, “just like the Afghans shot down Russian planes after Russia invaded Afghanistan.”

McCain is referring to how the United States armed Islamic militants in the 1970s, a policy that led to the rise of the Taliban, Al Qaeda, the Muslim Brotherhood and Osama Bin Laden.

The Americans and Turks were caught red handed by the Russians. They cannot deny the evidence anymore, because its right in their faces…no wonder the American mainstream media is pouring all their viewers attention into another home grown violent episode instead of putting the focus on Turkey being caught in bed with the terrorists and the terrorist oil trade. Certainly this is a much bigger story…

The Turkish government was also caught supplying the terrorists with weapons by one of the last remaining independent news mediums inside Turkey (Cumhuriyet). However, the journalists were arrested by Turkey’s government and thrown in Jail for treason…funny, whistle blowers in the USA such as Bradley Manning and Edward Snowdon get the same treatment so it is no wonder Turkey is a close friend and partner in crime with the US government, they’re exactly alike.

Recently, a prominent Iraqi politician pleaded with the US military government to stop the Illegal oil trade but his plea fell on deaf ears.

“I have personally contacted US representatives asking them to target IS trucks transporting Iraqi and Syrian oil to Turkey, only to be told that they were civilian targets so they, the US Military could not attack them,” Mowaffak al-Rubaie, leader of the State of Law Coalition party in the Iraqi parliament.

Of course, the US Government rejects Russia’s evidence because it seriously damages not only the Turkish governments credibility, but also that of the US government and its corporate military industrial complex.

Hey Erdoguns, time to resign…and free those journalists you’ve locked up for telling the truth about your shady deals with ISIS / ISIL / Daesh terrorists…You, Erdogan, Davutoglu and the US Government are busted… 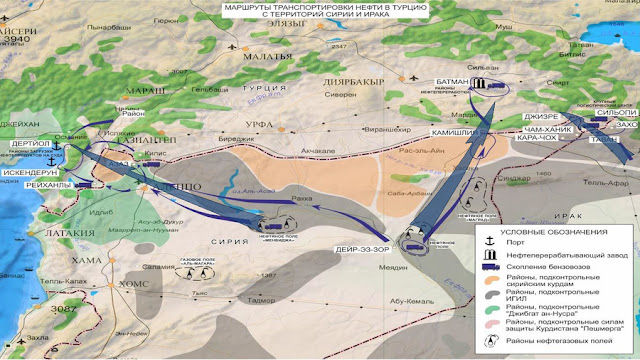