The US Military Deliberately Bombed the Syrian Army 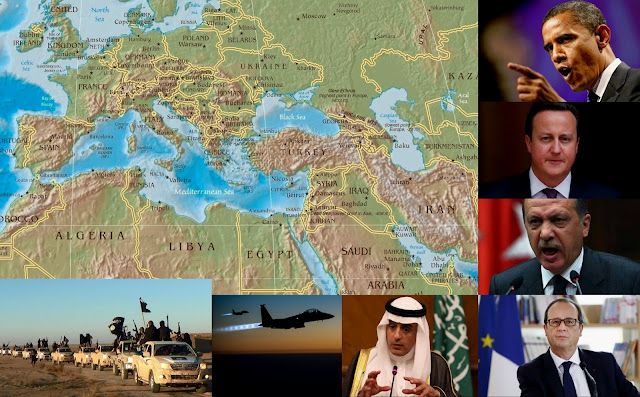 The US Military bombed a Syrian Army Position today, and in doing so, provided air cover for the Daesh mercenary terrorist army in the area.

Considering that the US Government insists that Syrian President Bashar al-Assad must go, it now appears that the Americans and their coalition are engaged in actions to make that happen.

The US is currently forming a coalition to bomb Syria with some of their European NATO allies, while also supporting their NATO partner Turkey even after their illegal oil trade with the Daesh Terrorists, their bombing raids on Syria and their shooting down of the Russian Military jet over Syrian Airspace.

Despite the obvious crime of shooting down the Russian bomber, the US saw fit to excuse Turkey and warn Russia that if Russia retaliated against Turkey, then NATO would respond and evoke Article 5 of the NATO treaty...and that my friends, would lead to World War III; that's how serious this is.

The recent additions (France, Germany, and the UK), to the American war coalition against Syria, seems to have the US feeling it has a moral right to bomb Syria as they continue to insist that Syrian President Bashar Al-Assad must go. The US Military escalation in Syria today proves without a doubt that the American’s are determined to eliminate the legitimate Syrian President and his government by force no matter what anyone thinks and it looks like they will destroy the entire country in doing so…

The US doesn't have to put American troops on the ground because they already employ a terrorist mercenary army in both Syria and Iraq, I say without hesitation that the US government and their NATO allies ARE THE TERRORISTS!

Now that the American’s are exposed for clearly trying to destroy the Syrian Army, there will be a United Nations Security Council meeting to condemn the US Military action. The US will then deny their part or they will say it was an unfortunate incident, even though they had the coordinates of the Syrian army positions as well as the terrorist positions. Once again, Russia will be the real diplomat and call for the US and its illegal coalition (France, UK, Germany, Turkey, and others) to join the real and legal Russian coalition trying to rid the region of terrorism…to which the US response will be to turn the offer down and insist that the Russians work with the US and their coalition…

Russia has said it will abide by the Law unlike their American counter parts, so nothing will be resolved as the US will continue to thumb their nose at International law by conducting a “NON UN Sanctioned Attack” on an Independent nation…which by international law is a “War Crime”.

The US and its coalition STILL say Assad must go…they don’t have that right, only the Syrian people have that right; and if one really respects the Syrian peoples rights, then one would NOT be bombing their country without the Syrian governments permission, because everything must be coordinated with the ONLY real military force on the ground battling the terrorists..."The Syrian Army" who the US just bombed.

The ONLY legal way forward is for the US and its NATO vassal states to work with Russia, Iran and the Syrian government, to eliminate terrorism in Syria. The same can be said for eliminating terrorism in Iraq as well, where the US & Turkey have also broken international law and invaded that country repeatedly…when is this US Bullshit going to stop?

Anyone who believes that the US, Turkey, France, UK, and Germany (among others) are there fighting terrorism in the name of humanity have intentionally chosen to blind themselves by propaganda bullshit. If the US and its so called coalition were serious about eliminating terrorism then they would have joined the Russian initiative from the very start…even so, with all the so called “accidents” that are now piling up, one would expect a civilized human being to apologize, to admit their mistakes and join with a legitimate group who are really confronting terrorism head on…

Unfortunately, we are dealing with a gang of nations mostly from NATO countries who insist on removing the Syrian government regardless of the cost. They support belligerent terror funding countries like Saudi Arabia without question.


Both Syria and Iraq have been totally obliterated. They will never be the same again as the War crimes that started all of this back in 2003 in Iraq, has left the entire region in an absolute state of oblivion thanks to the US & UK who will not cease until every community in the Middle East has been destroyed and gutted of its history, and that is not a joke because it’s not far off…

Could it be that they the US & its allies are concerned with their “Interests”? And, what are those interests and who benefits? Have they told you yet? Maybe its “OIL” and their domination of the energy supplies throughout the region. It certainly isn’t freedom and democracy because what they are doing does NOT bring Freedom and Democracy!! Who benefits in the region? The ones bombing Syria should give everyone a crystal clear picture…And who is warring on Syria? The US, UK, France, Saudi Arabia, Turkey, Israel, Qatar, and others…I suspect they all get a piece of the action in their violent and malevolent game of Thrones.

Anyone with a moral conscious cannot support the actions of these heinous war crimes, if they do, then they are declaring that they support the very evil they claim to be fighting against. Shame on them, and shame on those who support the destruction of humanity…

At this rate, every nation on earth that does not side with the USA will be branded as the enemy, if they haven’t already been labelled so…

Terrorism all over the World is supported, funded, trained, and armed by the US, UK, France, Germany, Turkey, Saudi Arabia, Israel, Qatar, and others who’s GDP and economic interests are tied to the weapons manufacturers that are owned by these gang members of the economic mafia…

US & NATO at War with the Syrian People & The Syrian Army

The US: News Archive and Time Line of Internal Violence and Global War Crimes

The Rise and Fall of the House of Saud
Saudi king warns West of ISIL Takfiri terrorism
Saudi Arabia: The cradle of terror
Israel, Saudi Arabia hand in hand against Iran: Report
Saudi Arabia provides heavy weaponry to militants in Syria
Saudi Arabia, ally to West and exporter of terrorism
Suicide for Sale: Saudi Arabia gets cash for blood in Syria