Military Build Up on the Turkey Syria Border 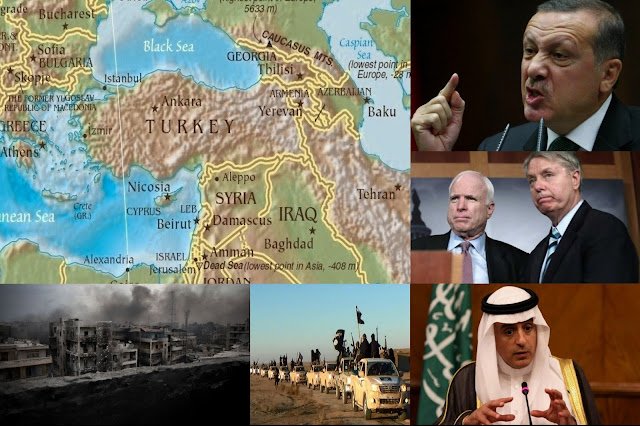 There is a rapid military build up on the Turkey / Syrian border that poses an immediate threat to the region and possibly to the world as NATO member Turkey faces off against Russia in an escalating war of words, actions and reactions.

Considering that Turkey deliberately shot down a Russian Bomber inside Syrian air space, then refused to apologize for their actions, and then claimed it was their right to shoot the plane down, is of grave concern, especially when NATO backed up Turkey’s claim.

We all know that the US, their NATO Partners, Saudi Arabia, Turkey and the Gulf State allies along with Israel still insist that Syrian President Bashar al-Assad must leave power. They also play a large role in funding equipping and training the mercenary armies on the ground in Syria, so it is no wonder that they do not want to join Russia’s coalition in eradicating the terrorists on the ground, since those terrorists belong to them…and how many times does it have to be said for thick skulled western leaders to get it, that only the Syrian people can decide through elections who will represent them?

The US coalition lacks a UN mandate to start a military campaign in Syria and when asked to join with the Russian and Syrian military to remove the terrorists, the US and its coalition of partners outright refused. The west’s concern is not about the terrorists in the region but the removal of Assad from power, mainly because President Assad claims his countries independence from US hegemony.

Turkey along with the US, Europe, and Saudi Arabia have all played a part in the mercenary armies on the ground inside Syria, no matter what their name or names are now, they are ALL terrorists, plain and simple, who have been tasked by their masters to remove the Assad government by any means necessary.

There has not been one sane mind among the western leaders when it comes to resolving the crisis they created in Syria. They all want Assad to go and continue to insist on it as they look for ways to get into Syria and bomb the country into dust to advance their combined agenda’s.

Thankfully there is a coalition of nations that adhere to International law and have made every effort to abide by those laws, which we citizens in the West believe in. Our governments on the other hand, are not listening to “we the people” or to common sense.

Terrorism needs to be eradicated, and the best way to do that is to stop funding them, stop arming them, and stop training them. Ending terrorism in the region will take the combined efforts of ALL nations working together in order to eradicate this plague of hate…but it is clearly obvious to everyone who has been following the events over the past four and a half years, that removing terrorism from the region is the furthest thing on the US coalitions mind.

Here are the Facts:

Why is the US acting so much more irrational than usual?

The US bully was out manoeuvred in their global war on terror by a Russian side that said, “ok, lets do this together” and then proceeded to take the initiative in an International legal manner. The American’s found themselves outside the law as well as outside the Middle East theatre, with no legal way back into Syria except to join the Russian coalition against terrorism in Syria…American arrogance and their pursuit of global hegemony over all nations prevails and will not recede, therefore we can expect further escalation by the US and it’s coalition in Syria…and other places. (Possibly Ukraine.)

Getting back to Tukey…

Turkey’s fatal error of shooting down a Russian plane and refusing to apologize for their action will meet with a reply by Russia in the near future and could come in the form of partnering with the Syrian Kurds, much to Turkey’s alarm since Turkey has been bombing the Syrian & Iraqi Kurds without mercy. Turkey is also at war with the Kurdish people within their own Turkish borders.

So, if Russia did indeed approach the Kurds and promised to protect them from Turkey’s bombers (unlike the Americans), then we will see a one up-manship by the US / NATO in response…

US deploys special forces to boost fight against ISIS in Iraq, Syria

The desire to bomb Syria by the Western coalition did not begin in 2015, but back in 2013 when the US, UK, France and others were convinced, without evidence, that Assad had used chemical weapons on his own people. These allegations turned out to be false as we all saw that the Western backed terrorists were the ones using chemical weapons.

It was only the efforts of millions of concerned people all over the World that stopped their governments from committing another war crime in the middle east, a fact that UK Prime Minister David Cameron responded to, in humiliated acknowledgement of a Parliamentary defeat, by his words “the answer is no and, I get that”…

It seems that Cameron and company didn’t get it…because here we are again, at a very dangerous point in time that demands the people of the West stand up and speak out against this determined coalition of war mongers.

Tell them to join Russia’s coalition to eradicate the terrorists and tell them to stop selling weapons to Belligerent Gulf States who arm the terrorists everyone claims to be fighting…and how hard can it be to track 1 Billion dollars a year in illegal Oil sales let alone thousands of trucks crossing the Syrian Border into Turkey…transactions have to show up in the financial system somewhere, because selling vast amounts of illegal oil and the purchase / sale of mass amounts of weapons has to be traced in the American Petro Dollar books…don’t tell me they can’t trace it… 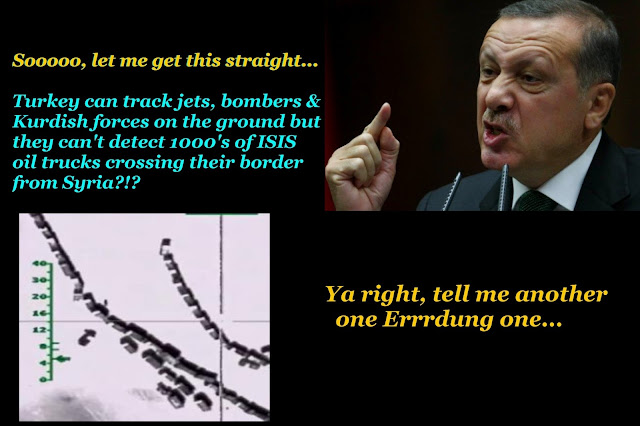 This blog also includes a live news feed from RT and a number of important video playlists that cover specific topics, rare documentaries, debate, opinion, and viewpoints found on the first post of the Year.