Are Chemtrails & Disease Pandemics linked to Pharmaceutical Companies and their Economic Growth? There are a lot of unanswered questions when the subject of Chemtrails comes up, especially when the government of Canada remains elusive on the topic. Government's are supposed to answer to the people, but of course this has not been the case in Canada. So, what is it that is being sprayed in our skies, why are they doing it, and why is there so much secrecy in what appears to be a massive operation taking place right in front of our eyes?


I’ve personally been watching Chemtrails since just after 911 in 2001. At that time I lived in Ayer’s Cliff Quebec near the Vermont border. Back then the US air force seemed to come out of nowhere to patrol the skies in our region. A sleeping giant had awoken after 911 and we in Ayer’s Cliff just figured it would go back to sleep after a couple of months of drills and that would be the end of it.

The presence of the US air force was not a welcome sight for me and nor were the grid styled chemtrails that descended over the country by high flying military aircraft. What could I do...

It wasn’t until 2005 – 2006 when I picked up photography that I began to notice Chemtrails again. They appeared in a number of my photo’s but I still had not put much thought into them. At the time, they were just interesting targets to take pictures of.

Later, when I moved to Winnipeg Manitoba (2007 – 2009), I began to notice a major increase in the number of chemtrails in the sky, as did a number of others witnesses that I had met on YouTube. There was a lot of speculation floating around then and a lot of government denial of chemtrails at the same time. But one thing was for sure, this was not an isolated phenomenon as reports from all over Western Europe and North America made their way onto YouTube. 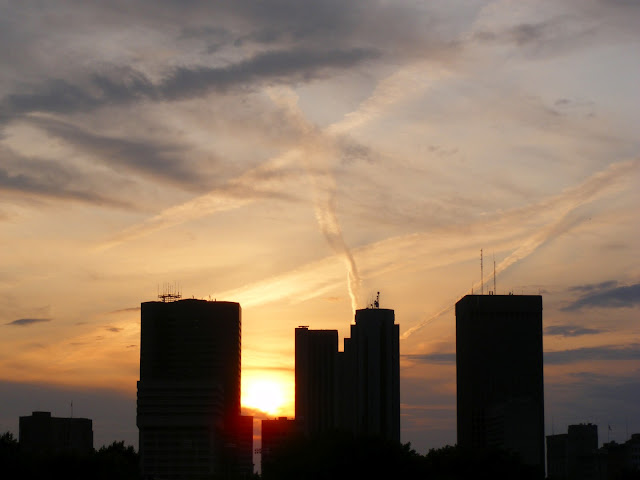 It was not localized to one area of Manitoba either, and still we had no answers from the government as to what they were doing and why they were allowing it to happen. 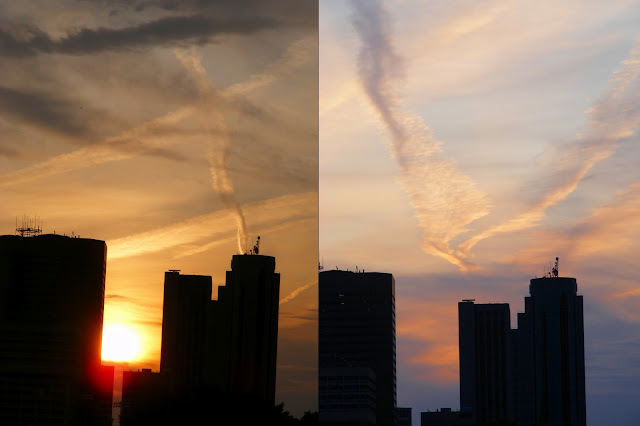 
During the month of August 2009 there was a lot of spraying going on in Manitoba, but just as people were taking notice of these massive sprayings the government and the World Health Organization (W.H.O.) began ramping up their fears on avian and Swine flu.


I moved to the West Island of Montreal late in September 2009 only to find the same Chemtrail spraying was happening there.
But here, I witnessed chemtrails unravel to cast large blankets across the sky...and they descended. Often, when looking up, you could see just how alien they were by the wind-strewn shapes, zigs and zags that came from what the planes left behind. What was contained in those clouds can only be speculated on by those watching. I sure had no clue at the time but the Canadian government must have known because the planes that spray these things fly right over the Air traffic control towers, and since 911, NOTHING unidentified goes by without a security lockdown.


Over the past year or two, I’ve noticed that the spraying increases when the sky is clear or increases 24 hours before it is to rain. Watching these chemtrails unfold and then descend on the population below is really sickening…pardon the pun.


One of the most bizarre things I have experienced is the droplets of rain that come from a sky filled with these poisonous clouds when there are no rain clouds anywhere…this happened to me in Winnipeg just before we moved back to Montreal in September 2009. Of course right after that we all got sick with swine flu…well, doctors said it was swine flu…good thing they had new medicines on the shelf just in time to treat the symptoms of this NEW disease eh! 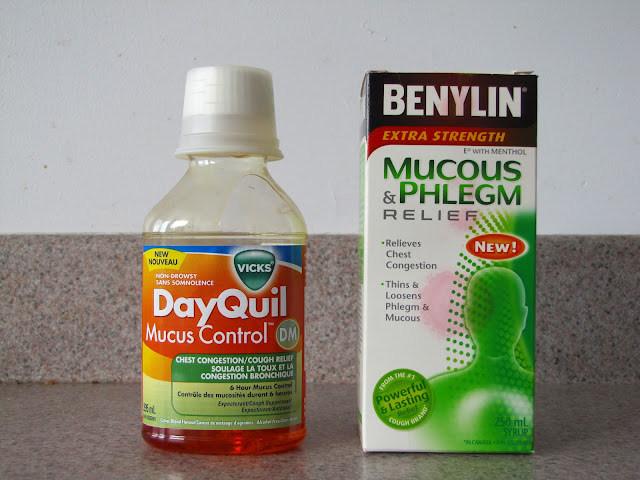 Photo By: Stewart Brennan - 2009 New Medication for Swine Flu side effects
I found it strange that the Pharmaceutical companies had already manufactured new products to combat brand new virus strains and their symptoms. The products were on the shelves before the flu symptoms were known by the public. Of course doctors at the clinics and hospitals were aware of these new products. Coincidentally or not…the new products had a 30% mark up price from the older medication that they claimed no longer worked. How do you get a new product out to the stores so quickly such as the two in the picture above unless the flu was a planned release to establish corporate growth and increased share holder profits?

That’s the type of sick world we live in, "for Profit corporations”, lobby groups, and Government in a collusion of theft, deceit, greed, and murder. Banks are doing it, oil companies are doing it, military equipment manufacturers are doing it, so why not big Pharma?


These same Pharmaceutical companies work with the military on biological weapons; which brings up the 2009 Swine Flu scare. Natives from Isolated reserves in Northern Manitoba were flown to Winnipeg with the same sickness that native people from the US and Mexico had months earlier. The only way to get it was by human contact...unless…unless it was dispersed in the air over the isolated communities or dropped in their water supply. I was in Winnipeg at the time to witness this story unfold, and lived a block away from the St Boniface Hospital where the Native people were brought in from up north.


The Natives NORTH of Winnipeg had no contact with people from the outside. The only thing they had in common with everyone else was the chemical spraying of the skies. Later the story unfolded in BC as well where a Reserve North of Tofino BC had over 100 cases reported with swine flu.

Then in a shocking announcement the Canadian government sent 100's of body bags to Native Reserve's in Northern Manitoba during this outbreak. How revealing can you get without giving information that the government was in collusion with this pandemic operation? The Canadian Government had to be AWARE of the potential of this lab made virus! The virus was made up of Bird Flu, Swine Flu and Spanish Flu, and that concoction could only be made in a military biological weapons lab!


I had also wondered why the native community was more susceptible to the ill effects of this flu virus, until I came across an article that stated how the 1918 Influenza Virus was exhumed from natives that had succumbed to the disease in 1918 that were buried in the permafrost.


There was another story linked back to 1998 in the NY Times where it was reported that they had indeed extracted Virus samples from people who died of the virus in Alaska.


Considering that the US military and government labs cultivated the 1918 influenza strain from tissue samples from a native woman found in the permafrost who died of the 1918 Spanish flu…well it truly opens up a LOT of questions.


One other thing I would like to say about this is that my step daughter who is part native became extremely sick to the point of pneumonia with this flu…the rest of us were not as sick but were treated with NEW over the counter drugs by the pharmaceutical companies.


My thoughts could write a book on this topic, but who would ever publish it. It is my belief that the corporate military establishment are using the global population as lab animals...and that most of these tests come from the pharmaceutical companies who can no longer grow by ordinary business means, so they spray lab made flu viruses over the sky to make people sick so that they can cash in on the already made solutions that combat the new virus of their own design. But I also think it goes much deeper than that. Considering that the ruling establishment such as the Royal Family in England, The Rockefeller's and many others such as media mogul Ted Turner believe in population reduction…more so since the secrets of the criminal banking system have been revealed to the public…I think these lunatics are crazy enough to decide that the test is no longer one for profit. The next phase in their plan seems to be coming if the current 2012 Pharmaceutical stock value is any indication. The Pharmaceutical companies need to stimunate growth because they are losing money...how do you bailout a Pharma company...


How far will they go this time now that the World is experiencing global economic turmoil and revolution? People are no longer asleep and are linking up together on the Internet while speaking out against their governments.


The establishment’s response has been one of complete ignorance and denial when pressed about chemtrails or anything that involves money. They evade the issues and then call for more austerity with deep cuts to social programs and then collude with other western leaders for more wars…I think they are crazy enough to unleash a deadly virus in the air this time. Then again, maybe the swine flu scare of 2009 was a test? Maybe a different strain was dropped on different people…it sure seemed that way in North America and in the Ukraine in 2009 – 2010.


How far will they go this time? Those making the decisions in the World have lost their morality. Will they unleash a virulent strain on the public for profit as their stocks dip once again?

Maybe it’s a far reach to suspect foul play, but then again the World has gone completely insane these days…and I do not trust my government, my bank or a boardroom decision that puts profit and shareholders before the life of my community…


The 47 Billion Hole in Pharma's Near Term Future
http://www.forbes.com/sites/ycharts/2012/09/01/the-47-billion-hole-in-pharmas-near-term-future/


The 6 top drug companies – Thugs of the medical world
http://articles.mercola.com/sites/articles/archive/2010/11/18/drug-companies-are-ranked-in-the-top-100-corporate-criminals-of-the-1990s.aspx


The False Pandemic: Drug firms cashed in on scare over Swine flu
http://www.dailymail.co.uk/news/article-1242147/The-false-pandemic-Drug-firms-cashed-scare-swine-flu-claims-Euro-health-chief.html

Final Thought:
I'm reminded of a line from the "Lord of the Rings" movie, where starving Orks asked their leaders an insane question about what to do with the 2 hobbits they had captured, “What about their legs? They don’t need those?”…their master replied with the execution of one of those asking and offered the dead remains to the group who then proceeded to cannibalize its remains.

Corporate Business 101 - The Master shareholder calls all the shots and dictates to the board members what direction or decisions are to be made in a company...remember, there are no morals in a Board room...there is only profit and they call it capitalism.
Posted by Stewart at 7:02 PM